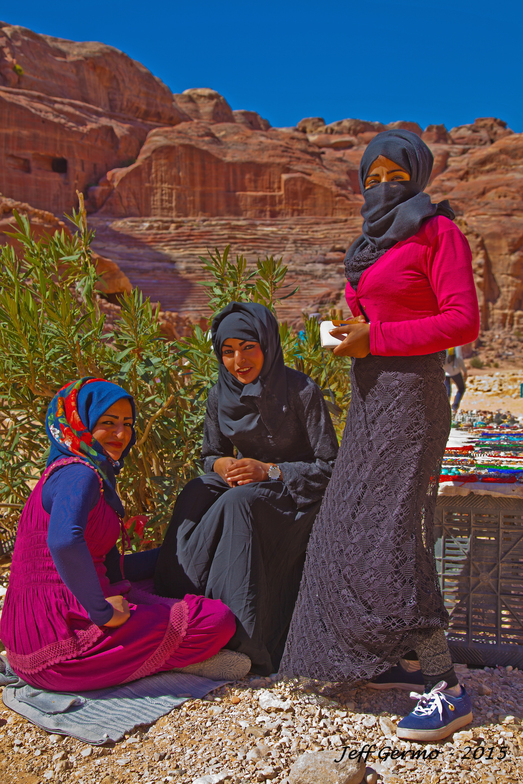 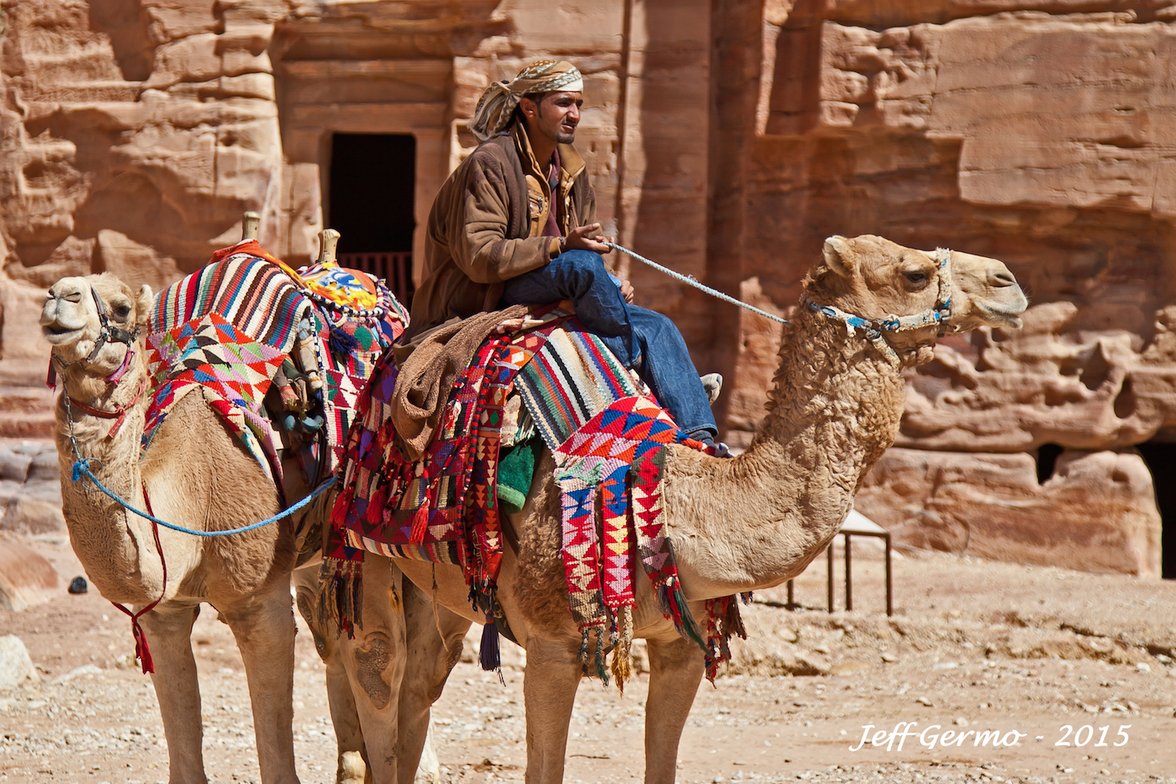 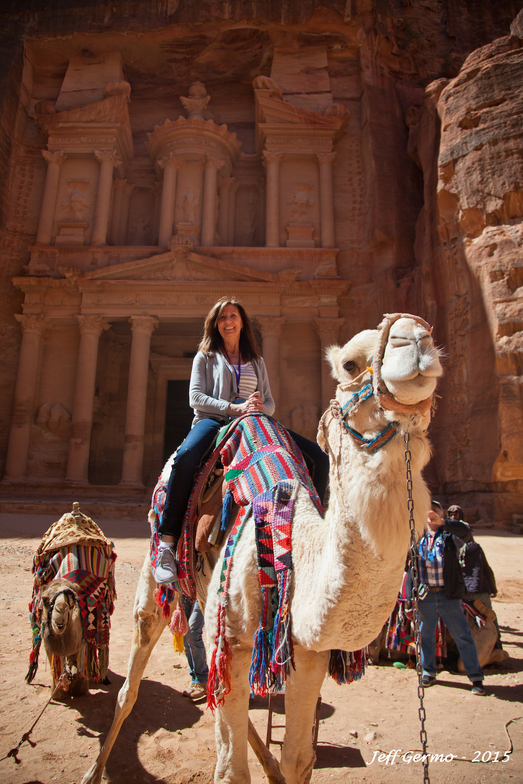 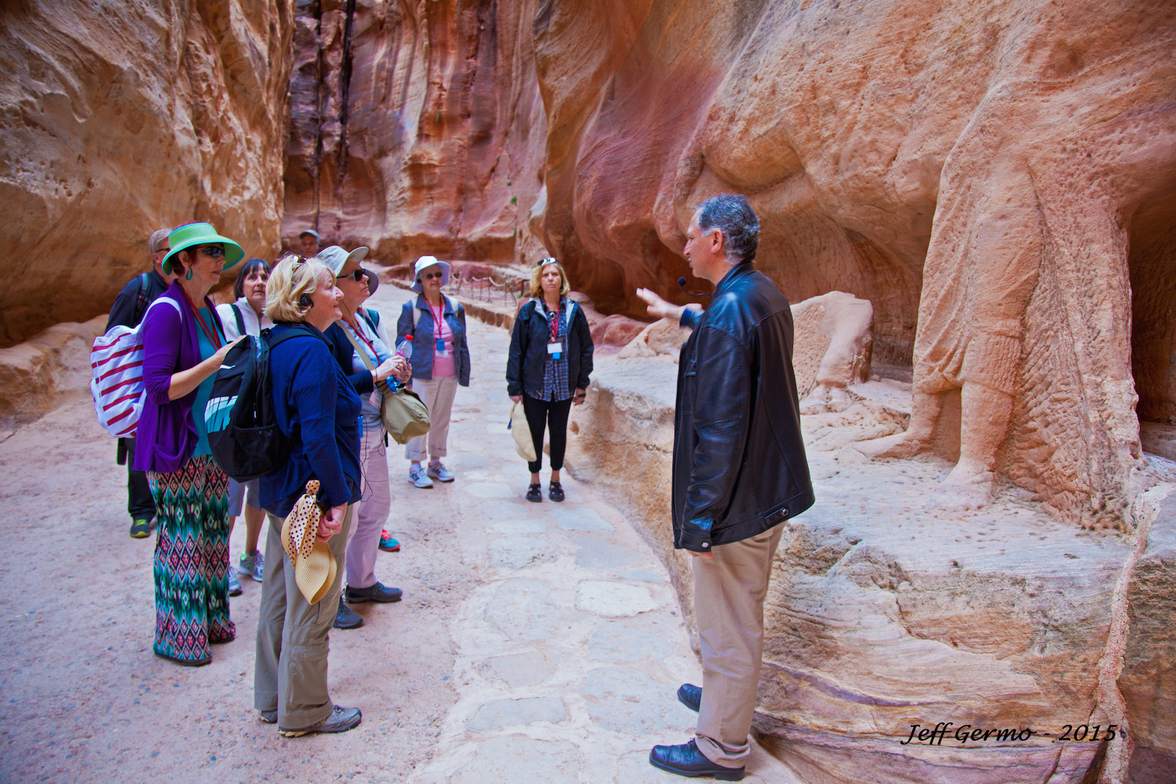 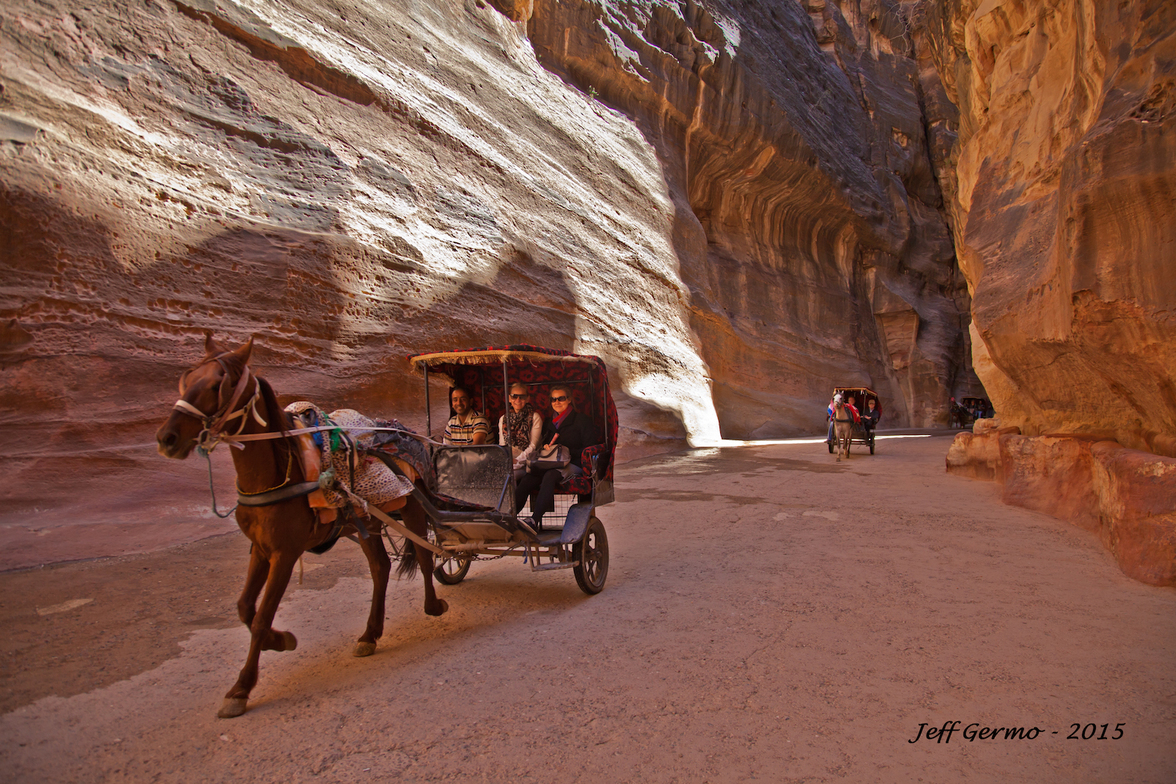 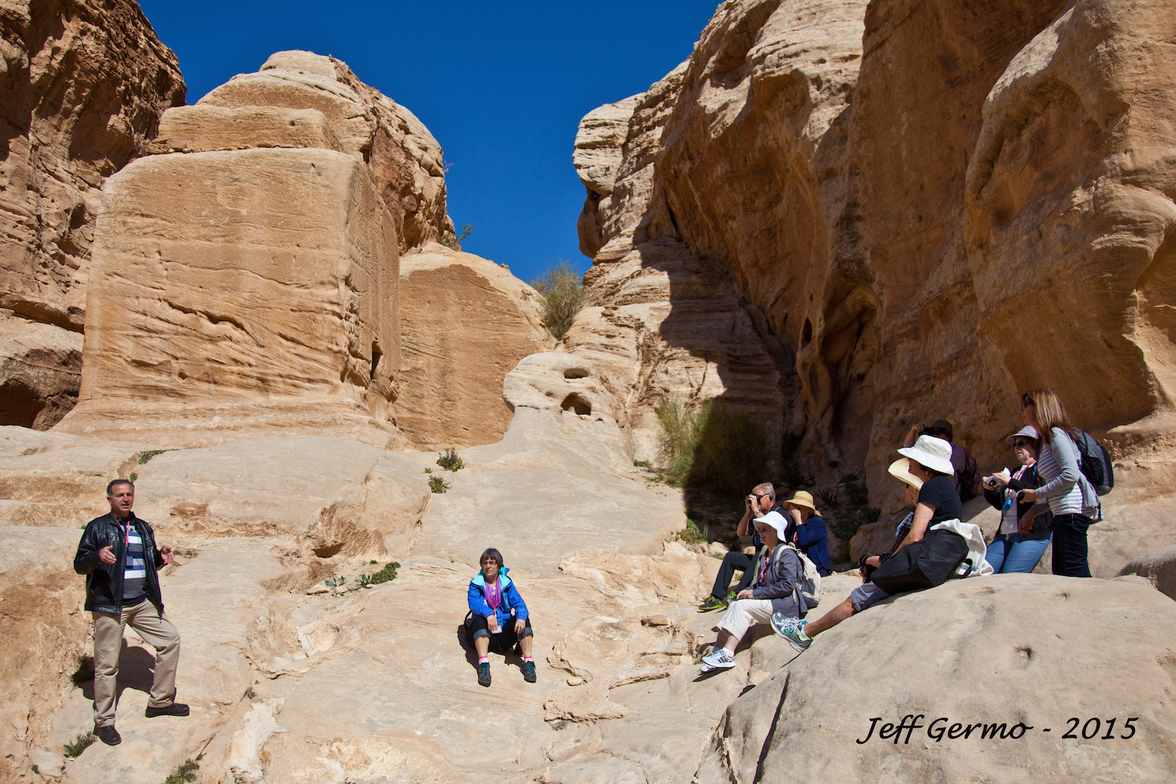 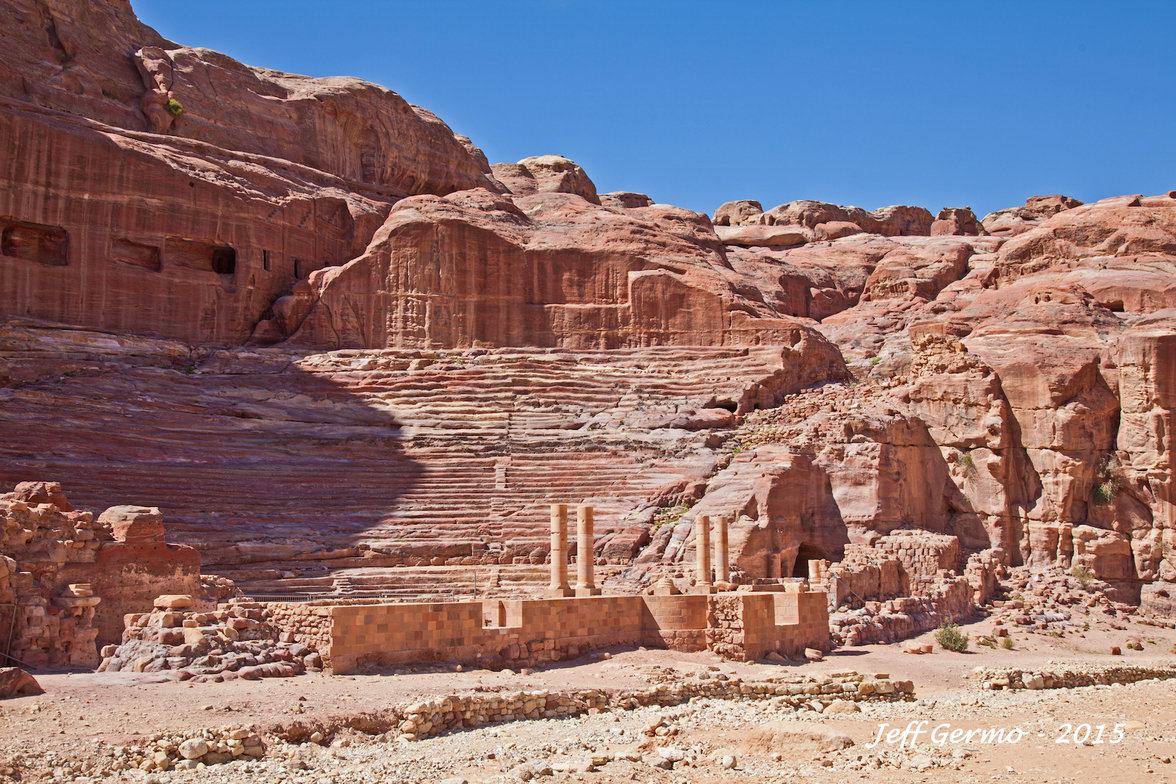 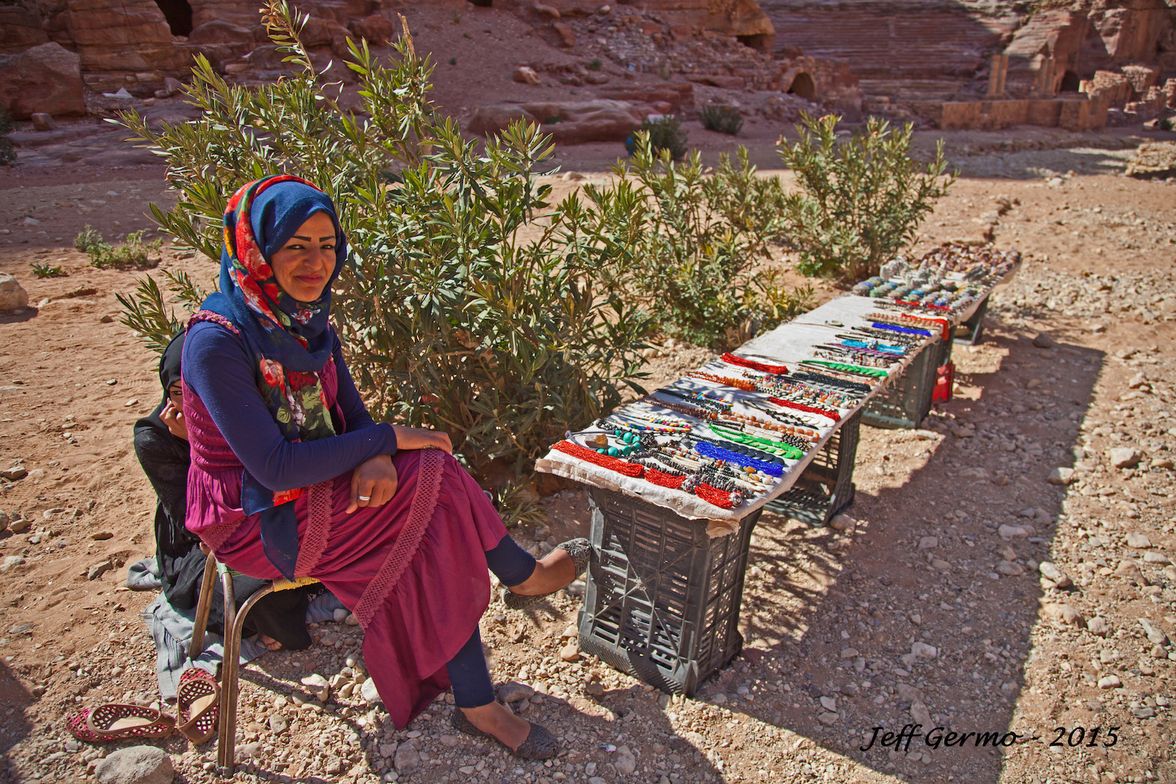 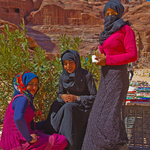 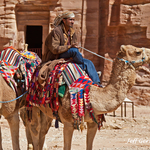 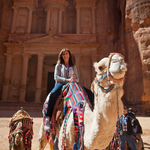 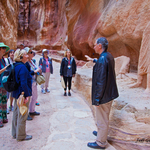 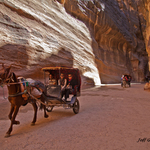 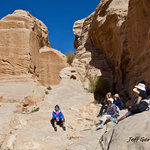 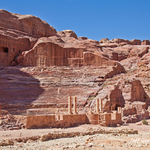 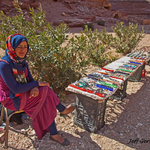 What a day! Our long journey to get here was well worth it. I think that is the sentiment of everyone in our group. I suppose I should begin where I left off on my last blog though. We arrived in Tel Aviv just before noon on March 2nd (I think. The days are sort of schmooshing into one another). Once off the plane we went through customs security and were met by Natalie from Christian Journeys holding a sign up so we would know how to recognize her. After retrieving our luggage from the carousel we exited security and were met by our Israeli guide, Isaac. Isaac, he told us on the bus, was born in Israel, raised in Montreal and moved back to Israel when he was 22. He speaks French, English and Hebrew fluently. His only job for the day, as far as it related to us was to take us to the Jordanian border and make sure we made it through ok. He was successful. We went through several tiers of security and once on the Jordanian side we were told by some of the customs workers to get in our bus and wait for our guide.

A few minutes later a head peaked in the door, "Welcome!" Our eyes met and we immediately recognized one another. He was the same we had on my trip on in 2011. "So, good to see you," we exclaimed simultaneously. After reminding me that his name was Hamz we started our way to Petra. It was about 3:00 pm and we had a four hour drive ahead of us. About half way there we stopped at a shop to have a coffee and browse at souvenirs. On the second half of our journey to the hotel I dozed periodically, head bobbing up and down like a punk rocker. By the time we got to the hotel my neck was killing me.

We arrived at about 7:30 and, after getting settled, immediately went to the restaurant and had a quick dinner and headed straight to our rooms. I was exhausted but unable to sleep so I wrote my blog and finally at about midnight was able to fall render myself unconsious only wake at 4:00. I laid in bed until about 6:00 rolled out, slithered to the shower and washed two and a half days of travelling off of me.

After an amazing breakfast we got into the bus and headed from Petra. Petra is an ancient city that is quite mysterious. Not a lot is known about it. Estimations vary as to the population. There is a 2500 seat theatre still partially in existence, so a good guess would be that there were at least 30,000 people and possibly as many as 100,000 at certain times. In AD 70, when Titus sacked Jerusalem, Christians escaped and hid there. That is almost the only significance Petra has to Christian history.

All along the cliffs on either side of the gorge that leads to the main attraction, were caves and dwellings carved into them. Around every bend is a new discovery. The climax being when you wend through the canyon and it opens up to the magnificent site of the Treasury carved into the wall of the gorge. One of the things we had to get very used to was bartering with the bedouins. We couldn't not walk more than a few steps without another one trying to sell us postcards, jewellery, or a ride on a donkey, horse, camel, or horse drawn buggy.

After giving some of the group members a chance to get on a camel and have their picture taken we continued on our treck. Along the way I stopped and looked at some jewellery. That was a mistake. There were three young bedouin girls looking after their stand. I asked if I could take their picture. They consented but after I took their photo they said that I had to buy some of their wares. "I can't," I said. "I have to catch up with my group. I'll catch you on our way back." "Promise," she asked. "Yes, I promise."

We continued on for about another hour and a half and then made our way back. The one girl spotted me from a distance and pointed her finger at me. "You," she yelled, smiling. "You," I said. I'm back, just like I promised." I perused some necklaces and found three that I thought Ruthie would like. "How much for these three?" "How much will you pay me," she said, knowing the addage I hold to as well. He who speaks first loses. I spoke. "$10 for three," I offered. "$10? No way. You give me 50 Dinnar." 50 Dinnar would be about $75. "Sorry, I can't afford that much. I'm just a poor Canadian." We haggled back and forth for about fifteen minutes. In the meantime my group was making their way back to the gate. We hadn't had lunch yet and it was 1:00. It would take me about 45 minutes of fast walking in the heat to get there in time to eat.

I rushed back. Every few feet someone would ask me if I wanted a ride back on a variety of livestock. "Nope." I said each time, wishing that I wasn't so cheap. On the way back I started to feel guilty about wearing that girl down so much. It was her livelyhood and I just took it from her.

I got back to the gate where everyone was seated at a restaurant waiting for their food. I made it back in time. I was dripping from sweat from the forty-five minutes of speed walking I had just done. Hamz asked me how I did with the bartering. "Good, I think." I got three necklaces for $25." He just looked at me with a blank stare. Again I got a sting of guilt. Hamz must think I am a cad to take advantage of this poor bedouin girl. "That's too much. You should have only paid $10." Go figure. That's what I started my bidding at. Oh well, it will help pay for her Mercedes.

Tommorow off to Mount Nebo where Moses gazed upon the Promise Land, and to a site where Jesus may have been baptized, and then to the Dead Sea where we will stay one night.